Continuing in the style of recent posts and asking a question about how old lenses compare with current day computer designed optics, I take a quick look this time at a Nikon Nikkor 50mm f/1.8 AiS "pancake" lens and compare it against an APS-C format Sony 50mm f/1.8 SEL OSS.

Here is the scene setup.  It's just a pair of closed gaze scrims in our apartment.  The details are interestingly small, so therefore useful for this kind of "wee look-see." 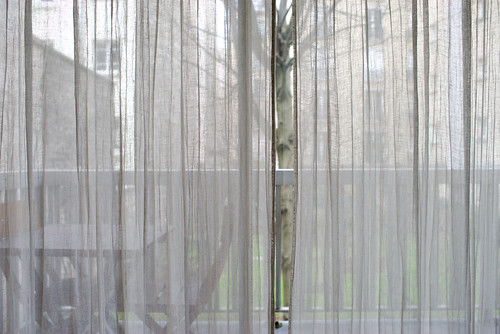 [As always, click on the image and look at it to 100percent file size to see whatever there is to be seen.]

At f/1.8 the Nikkor 50mm is slightly softer than the Sony.  I figured this might be the case based on a webpage that has long disappeared that compared the Sony against Leica's latest 50mm and won.  Though I see nothing wrong with the Nikkor, this Sony optic is very special.

From f/2.8 on down through f/8 I have a difficult time telling the difference between the Nikkor 50mm lens and the Sony 50mm.

This comparison includes "Capture Sharpen"'d f/1.8 images.  It's interesting to see how much "crisper" these images become with a simple push of a button.

As I've suggested in the past, I suspect "Capture Sharpen" removes the character of a lens when shot wide open.  It's at the widest apertures where I've seen the designed-in effects of spherical and chromatic aberrations of old Nikkor manual focus lenses.

After seeing a large show of Steve McCurry's glorious images at the Musee Maillol where I studied his images with an eye toward such things, I may have more to say about "Capture Sharpen" and optical effects in the future.

Out of Focus Rendition Studies

Tools of the Trade